My term on Rainbow List is over (check out our final list here), so now I’m free to talk about whatever LGBTQIA+ books I want. But, first, let’s talk about love. Queer love. In children’s picture books. What better post to tie into Valentine’s Day?

As with most forms of media, children’s picture books as a whole perpetuate heteronormativity. Heterosexual, two partner relationships have long been the default for most family-centric picture books. It wasn’t until 1989 that Heather Has Two Mommies brought same-sex families into mainstream children’s publishing. Since then, not a whole lot has changed. There are now more picture books—even board books—featuring queer characters and rainbow families. But, if illustrations include queer couples, the couples are most commonly depicted in a way that relies on the text of the book to convey the relationship.

Let’s look at two notable exceptions. Farmer Jay and Farmer Kevin in Megan Dowd Lambert’s A Crow of His Own, illustrated by David Hyde Costello, are touching in one spread. Two moms in Susan Meyers’ Everywhere Babies, illustrated by Marla Frazee, are napping next to their sleeping baby. 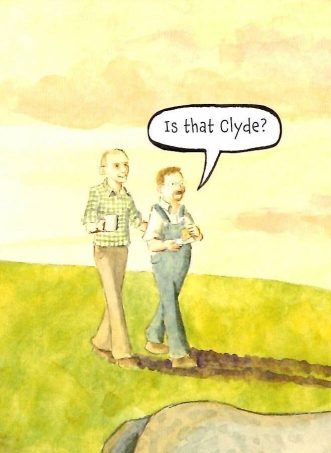 These two sets of partners are clearly connected in a romantic way. These characters aren’t, however, central to either story. This happens a lot in picture books with queer couples or families. While it’s certainly not a bad thing (I’m of the more, more, more representation camp), I’m ready for a family story that focalizes queerness and actually lets us see it firsthand.

Enter Jerome By Heart by Thomas Scotto, illustrated by Olivier Tallec (coming April 2018). It is, to my knowledge, the first children’s picture book since Linda de Haan and Stern Nijland’s King and King (published in 2002) to acknowledge and consider same-sex attraction as a theme. It also uniquely focalizes around the queerness of children, rather than adults.

Where King and King placed a censoring heart over the lips of its kings, Jerome By Heart openly shows romance on the cover (and multiple times throughout the book).

According to Savin-Williams and Diamond, “the age at which people realize their LGBTQ identity tends to fall between eight and ten.” Yet we don’t often see queerness explored in the literature for this age group outside of adult characters. This is why, when I saw this book at the American Library Association’s midwinter meeting, I openly wept. I have been waiting for a book like this and I worried I would never see one published.

You might say that romantic love has no place in picture books. But I would argue that it does. Children observe grown-up relationship habits constantly, whether the habits belong to their own grown-ups or to characters from TV and movies. If Adam Rex’s XO, OX: A Love Story, illustrated by Scott Campbell, can glorify stalking alongside heterosexual romance, why can’t more picture books show queer characters alongside innocent gestures that convey their love for each other? By not showing—or, by selectively depicting—queer relationships, picture books are, in effect, sending queer characters back into a closet of endpapers.

It’s 2018, nearly 30 years since Heather Has Two Mommies was first published. Jerome By Heart gives me hope that we are finally reaching the next level of queer representation in picture books. I can’t wait for you to read it—and I can’t wait for more like it to hit the market in the coming years.

One thought on “Que(e)rying the Picture Book”